If You Love Food You Have to Read This

Food policy analyst Taarini Chopra helps us understand why the way we buy, eat and think about food has consequences for our health, our environment, livelihoods, and how it very immediately impacts our lives. If we intend to live and eat on this planet, this is information we all should have. 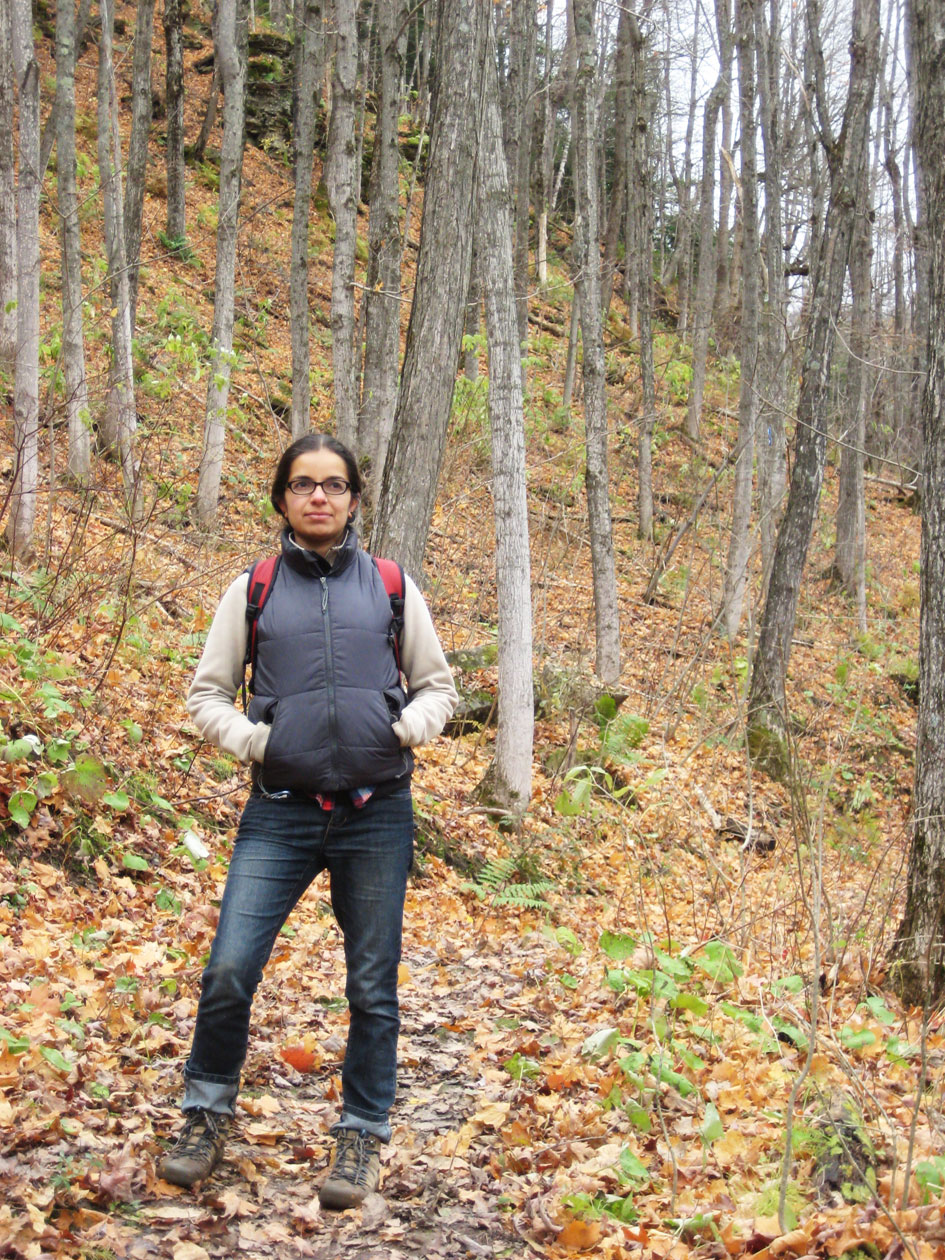 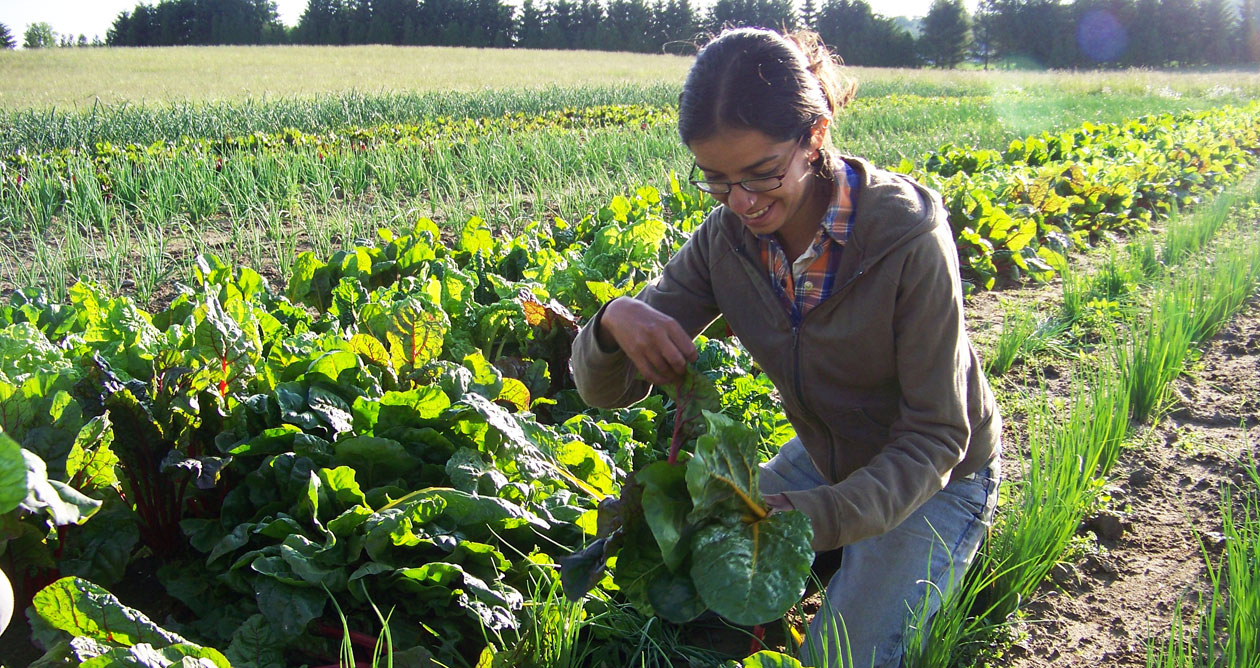 Taarini works with two great environmental organizations based in Canada, doing research and campaigning on issues related to GM food and seed biodiversity, and has been awarded for the same. She loves nothing more than growing, cooking, and sharing food.

What made you want to dedicate your professional life to food issues?

It wasn’t originally my plan. I studied environmental science and biology, but quickly realized that our food and farming systems are the most immediate spaces in which we all interact with our environment. The way we grow our food and what we choose to eat very directly shapes our health, our environment, and the livelihoods of a large percentage of the world’s population. 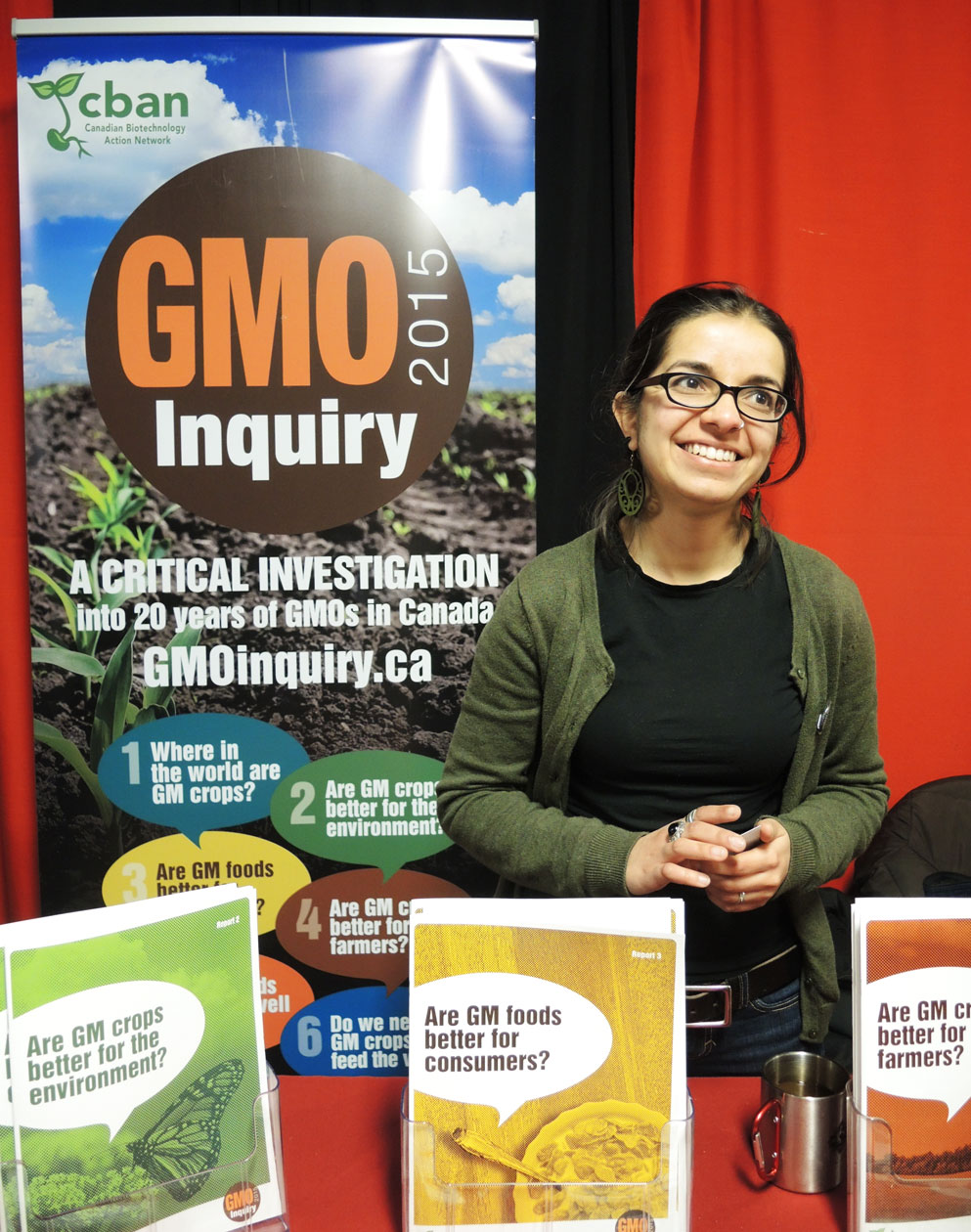 How much of our food is GM today?

It’s very different in different parts of the world. There are four major GM crops that are grown anywhere in the world. These are corn, cotton, soy and canola. All four of these crops are grown in North America, and a fair bit of the processed food in grocery stores in Canada and the US has GM ingredients. The Indian story is very different: the only GM crop grown in India is cotton, which is used primarily (though not exclusively) for fibre. There are many countries in the world that do not grow any GM crops at all.

There are no GM varieties of most vegetables and fruits being sold anywhere in the world – no GM tomatoes, no GM oranges, no GM strawberries, and (despite what we often hear) there is also no GM wheat or rice on the market.

Should we be intimidated by this? Why does it matter?

It matters a great deal, for a number of reasons. GM seeds are very expensive, and are owned and patented by a handful of large multinational companies. Farmers have to buy seed every year, instead of being able to save seed every year from their crop, to plant the next season, as they have done for generations. For small-scale farmers in India, for instance, this means taking out large loans at the beginning of the season. When crops fail, as GM (Bt) cotton crops often have over the past years, these loans become very hard to re-pay, pushing farmers further into a cycle of debt and poverty. GM crops also haven’t stood up to their promise to reduce pesticide use, and there hasn’t been nearly enough independent testing to assess their long-term safety.

As we look ahead to the challenges of dealing with climate change and feeding a growing population, we need to look to a system that is based on ecological principles, that reduces the use of fossil-fuels and pesticides, that is in the hands of the millions of small-scale farmers around the world, and that relies on seeds that are well adapted to a wide range of changing environmental conditions, as our incredibly rich diversity of traditional seed varieties are. This is the only food system that can keep us fed; GM crops are not feeding us today, and they will not feed us in the future.

That said, we don’t need to be intimidated. The large majority of the world’s crops are still not GM, and most GM crops are still grown in just a handful of countries. In fact, 70% of the world’s food is still grown by small-scale farmers. This is the kind of farming we all need to support, not one controlled by a few large companies, that has heavy costs on the environment and on farmers.

What role do we play in all this?

Well, we all eat. This is what makes us all deeply connected to the broader food system, whether we think about this often or not. Every time we buy our groceries, we shape the food system we are part of. Every time we buy foods that have been grown without pesticides, we support the environment. Every time we choose to buy whole foods – vegetables and fruits and grains – instead of processed products, we keep our bodies healthy and support farmers, instead of large food processing companies. The way we buy, eat and think about food has consequences for our health, our environment, and the livelihoods of farmers around the world. 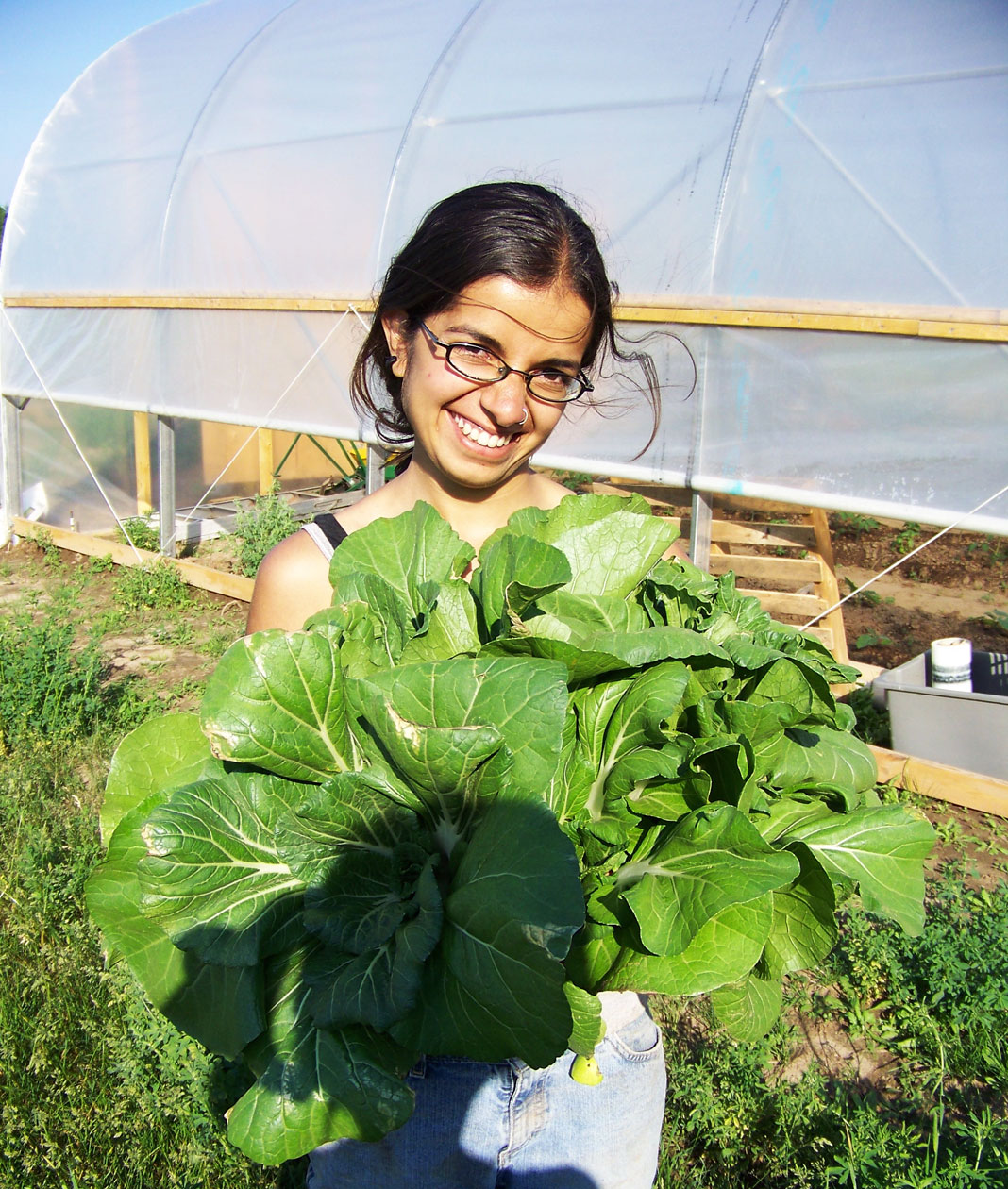 What does local, sustainable eating really mean? Aren’t we eating local by default?

Not necessarily. Often, especially in countries like India where the farming season extends through the entire year, local food may always be available. However, this is not the case in colder climates, where locally grown fresh vegetables and fruits are not available in the winter. In Canada, where I live, for example, much of the fresh produce on grocery store shelves is imported from other countries. This has environmental costs, which come with packaging and transporting food hundreds of kilometres, and often social costs for the communities growing that food for export markets instead of for the local economy. Eating locally and seasonally in Canada means adapting our diets to suit the seasons, and storing and preserving food in the summer.

Sadly, even in countries where food can – and is – grown through the year, globalization and trade have meant that local products are often displaced by imported ones. This means a higher ecological footprint and less income for local farmers. Choosing to buy and eat foods that are in season and have been grown locally is choosing to support the rich diversity of our agricultural systems and the livelihoods of local farmers.

Why is organic food so expensive?

Organic food is often more expensive than conventional food because it reflects a truer cost of food production. Conventional agriculture is often subsidized: this may take the form of monetary subsidies for conventional growers, or incentives for farmers to produce cash crops or export crops, which organic farmers don’t get. Organic farmers often use more time- and labour-intensive methods because they are more environmentally friendly. The extra cost compensates them for this sustainable approach.

The price of conventional food may be less, but it doesn’t reflect the environmental cost (for example, the cost to our water systems and the long-term health of the soil, both of which we need to continue to produce food in the long run) or the health cost (many of our current chronic diseases cost us a lot of money to cure and address, and many can be traced back to unhealthy eating patterns) of chemical agriculture.

What food items should we prioritise to be organic?

Ideally, everything! Food that is grown organically – that is without pesticides – is better for us and for the soil, water, pollinators and the entire ecosystem. As our grandparents often remind us, a few generations ago, this was the way all food was grown. In the past few decades, however, we have increasingly moved to using more pesticides, herbicides and fertilizers on our fields. These chemicals end up in our soil and water, they affect other plants and animals in our ecosystems, and they have a number of negative impacts on our bodies.

There are some foods that often have higher levels of pesticides. You can see some examples in the Environmental Working Group’s annual “Dirty Dozen” list of foods with the highest pesticide loads. 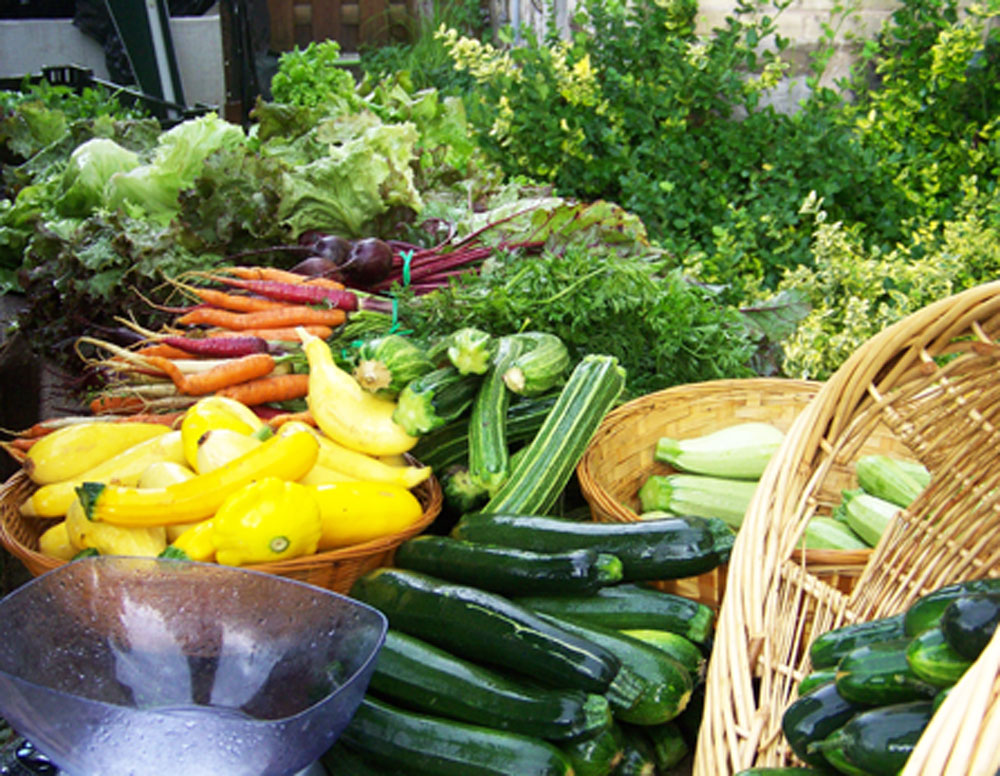 How do we know it’s really organic?

Foods that are certified organic will have a stamp that tells you so. There are also a growing number of projects, such as food box programs and organic markets, that are bringing more organic food to consumers. And perhaps you know a friend or a farmer who shares the bounty of their harvest with you – their food may not be certified, but if you know that they are growing their food without any chemicals, that’s a pretty good guarantee!

Assuming we aren’t all blessed with cooks to help us, do you think it’s really possible to cook and eat fresh everyday with the pace of life we lead? Any tips for making it easier?

Yes! Cooking doesn’t have to be complicated. I find if I plan ahead just a little bit, I can shop more efficiently, so that I have enough food in the fridge for a few meals, and don’t have to go shopping after a long day. I am a fan of simple, quick meals – delicious, healthy food doesn’t have to be complicated or onerous. Save the fancy three-course meals for weekends and guests – or don’t bother with them at all! If I know I have a few busy days coming up, I find it helpful to have a big pot of food in the fridge – leftovers may not be exciting for several meals in a row, but they are healthier and cheaper than eating out every day!

Any reading materials or films to help us know more?

There is such an abundance of information on issues related to food out there. The organization I work for in Canada, the Canadian Biotechnology Action Network (CBAN), has a ton of information on GM foods and crops, and their impacts. www.cban.ca. Our discussion and research on the commonly heard myth that we need GM crops to “feed the world” may be interesting to some.

The Coalition for a GM-free India monitors and campaigns on GM issues in India. Gene Campaign’s website has lots of information on GM crops, climate change and agriculture, biodiversity and food security issues.

The documentary Future of Food gives a well-researched and complete overview of several of the issues in our current global food system. Cotton for my Shroud and Bitter Seeds both explore the issues that have come with the introduction of Bt cotton in India.

Who are your food heroes? Why?

There are so many people doing incredible food and farming related work. The many, many small-scale farmers around the world who grow the majority of our food are perhaps the ultimate heroes. They also do the incredibly important work of saving and sharing seeds, and the knowledge that goes with them. The diversity held in these seed collections is key to our ability to adapt to climate change.

And of course, those who put food on the table in its most literal sense are everyday heroes in their own right. Most of my knowledge of food, how to prepare it, think consciously and creatively about it, and my deep connection to it, has come from my grandmother and mother – they are definitely food heroes in my book!

Finally, what is the one thing you really want us to know about our food?

It matters! Food is one of the things we all have in common. We all eat, every day. Food goes beyond just sustenance – it shapes, and is shaped by, who we are, where we come from, how we feel, and how we interact with the world around us. That’s a good reason to be mindful of what and how we eat!